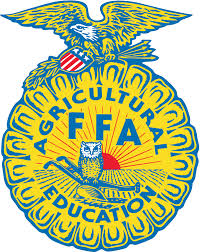 The Vocational Farm Practice Club, was organized in 1922, under the supervision of Mr. Brock.  It was composed of all of the boys enrolled in Agriculture, and other students of the school were eligible for membership, but were not allowed the same privileges ex­tended to the "Ag" boys. In 1922 there were thirty-five members in the club.

The club had three aims:  to create a spirit of loyalty by bringing the boys together, to give the members training in parliamentary rules, and to give all the boys a chance to hear talks made by men interested in agriculture.  During the year, the program was varied. Speeches are made by boys who had entered in judging contests and by specialists in certain topics in agriculture.  A picture machine was purchased by the club in order that educational films could be shown.

The Agriculture Club voted in September, 1929, to become the Mt. Vernon chapter of Future Farmers of America, a national organization established in Kansas City, November, 1928, and composed of students enrolled in vocational agriculture. The purposes of this organization are as follows :

The new club was a charter member of the Illinois Association of Future Farmers of America.

Each of the forty-nine members signed his name, as a charter member to the club's charter, which hangs on the wall in F101.  Each has received his "Green Hand" pin.  Other degrees are "Future Farmer", "State Farmer", and "American Farmer".